Stretford announce signing of 'The Kong' 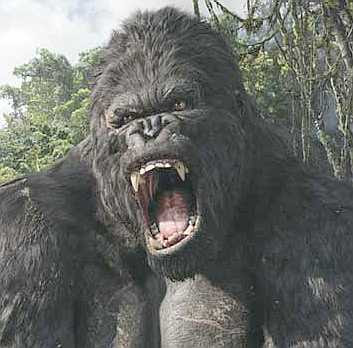 Above: I am Kong, hear me roar!

In a blockbuster summer transfer window, Stretford FC made a blockbuster signing of their own after they secured the services of midfield destroyer Kong Ting An to their squad. The player, commonly dubbed as 'The Kong' by fellow players for his monstrous style in midfield, finalized personal terms and passed a medical last June. The unveiling was delayed for a couple of months as agents and staff were trying to acquire clearance from the Agri-Food & Veterinary Authority of Singapore (AVA) as well as the World Wildlife Fund (WWF) for the player's permit. Stretford were believed to be tracking the player for almost a year before finally landing their man.

In a press interview held yesterday evening at his Ang Mo Kio residence, Kong was in jubilant spirits as he sat down with SFC News to share his thoughts on finally donning the red of Stretford.

"It's true that they (Stretford) approached me some time ago about a possible move. But back then, I believed a move wasn't the right option as I felt I needed more time before I was ready to move to a club of Stretford's nature." said Kong.

"But now that it's happened and also having had the opportunity to feature in some matches already for the Enders, I'm absolutely delighted to finally be here and giving my usual 110% in games."

Kong's teammates were also excited with the addition of the hardman into the team and some have already seen first-hand in training where the Ang Mo Kio-born midfielder earned his nickname from.

"He's a beast even during our training sessions!" said striker Shawal Rosly.

"I am one of the unfortunate few to have had a taste of his challenges in training. But I guess that will keep the rest of the lads on their toes and at their best too. This is what the club is all about and by signing Kong in, we are underlying our objectives as a team looking to rise up to new levels."

Shawal then jokingly shared his thoughts on new "signings" that the club may want to consider following the arrival of Kong.

"Looking at how he (Kong) has been in training, signing a couple of physios wouldn't hurt too!"