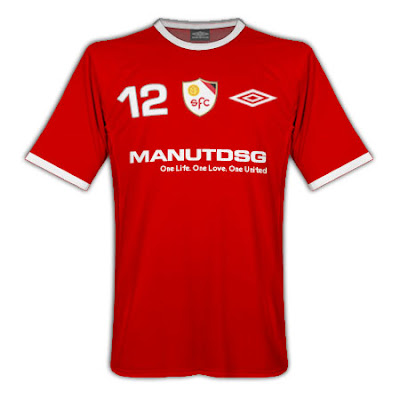 Amidst the hype surrounding United's UCL clash against Inter at Old Trafford in a couple of days, closer to home, there have been rumours brewing of leaked images believed to be the designs for the 2009/2010 home kit for Stretford FC.

After several attempts to reach kit manufacturers Umbro, they declined to comment on the leaked images. A source close to the Stretford FC however, has hinted that the revealing of new team kits would be something that the management would be working on.

"The team kit is essential to any club. It brings uniformity and brings a great feeling of belonging to the club. While I cannot give you a clear indication or comment on those images, one thing I can confirm is the color of the home kit - RED!" said a cheeky Ivan Lee.

Stretford FC - or the Enders as they are affectionately known as - are the official football team of the ever-popular Manchester United Singapore Supporters' Club (ManUtdsg) forum which is led by chairman Louis Chia.

Following the recent formation of the team a few weeks ago, the Enders have been actively preparing for their first match after recently concluding an eventful pre-season competition in the far West region of Boon Lay before ending the 2-day tournament on a high at Ngee Ann City Civic Plaza after making it through to the knockout stages of the competition. And with increasing speculation that their first match will be taking place on the 29 March, the team will be working hard in the coming weekends leading up to it - SFC News.
---

SFC: Like the kit design? Post a comment or write on our 'Shout!' section to tell us what you think.
Posted by Stretford FC at 4:13 PM