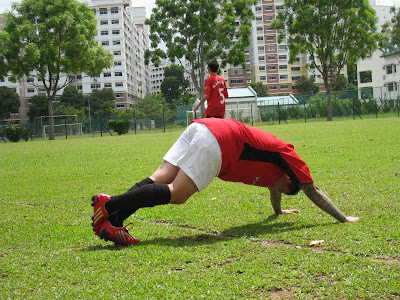 Above: Oki (in red) stretching before a match

Physios over at the Stretford FC medical room are sweating over the fitness of star striker Alvin "Oki" Poh after he suffered a twisted ankle during last Sunday's training session. Doctors have had a look and while the good news is that "Lao Da" - as he is known by some of his team-mates - did not sustain any fracture to the joints, he may be out of action for at least 2 weeks.

SFC News visited a seemingly relaxed Oki at his 6-storey Yishun mansion and were surprised to find the Enders frontman still being able to see the lighter side of the whole injury.

"It's not that bad lah. N*bei, why waste time come interview me?" said Oki with a sheepish grin.

Oki even went on to joke that "It was si beh funny! I went to the doc and said I suspect my skull was twisted and he gave me a worrying look!"

"Only after he saw the skull tattoo on my ankle then he realised what I was talking about!"

It remains to be seen whether the striker will recover in time for the first match but word has it that he seems determined to make a speedy recovery after a friendly locker room wager with team-mate Shawal Rosly to claim the club's top scorer honours this coming season. - SFC News