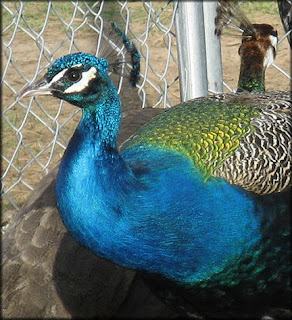 Above: Looks like fans have to wait a week more to see the Blue Peacock

There has been a growing air of uncertainty surrounding the opening match of Stretford FC's campaign following the withdrawal of The Legends FC from their initially scheduled 29 March friendly.

The Legends FC spokesperson, Andy Lee, cited a mixture of "a poor turn-out" and also numerous members of his squad "away on duty" as the reasons behind the postponement. In what must seem to be an anti-climatic episode for the Enders, Stretford FC winger Glenn Wong took a much more philosophical stance to the news.

"To be honest, yes I'm disappointed that we may have to postpone this weekend's match. The lads and myself have been working hard in training to prepare for this and *whatsoever. Wah lao! I even dyed my hair a special Peacock Blue color for this!" said the Kembangan native.

"That being said though, another week delay just means another week more to prepare ourselves as a team. We're new so I guess this could also be good for us to work on more things together and also **enjoythebreeze.com" added Wong.

It looks likely now that the much-anticipated debut for the Enders will have to be delayed by at least week - leaving organisers, sponsors and players understandably disappointed.

Stay tuned for more updates as SFC keeps track of latest developments in the week ahead.


*whatsoever - a term which is used habitually by Glenn.
**enjoythebreeze.com - famous blog which star winger Glenn posts his thoughts etc.