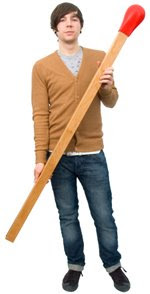 Above: Big "Match" or Big Match for Yeo?

Months back, a string of clubs and scouts were lining up outside the office of Yeo Chang Yao's agent following some impressive displays at his training compound in Da Qiao. The race for his signature was finally put to an end when Stretford FC secured the services of the midfield wizard on a long-term contract.
Fast-forward to May '09 and things have not gone as Yeo had planned it to be.
A series of international call-ups and issues with his work permit saw Yeo missing out on the Enders first few matches before finally making a nervy debut against Nippon FC - which Stretford heavily lost 5-1. The usual electric runs and clever passes were missing and it had look as though the nerves had the better of the new signing. Much criticism was to follow from the media after the match with some camps claiming that the big match atmosphere may not suit a player of Yeo's temperament.
And now, with less than a week before Stretford FC face their biggest test yet against fierce rivals ChelseaSG, another "big match" looms ahead for him.
However, when SFC News spoke to Yeo today to get his thoughts on his start and the match against ChelseaSG, the usually reserved midfielder had other plans in mind.
"I'm aware that it's not the best of starts but life goes on. With more playing time and getting used to, you will see the best of me soon." said Yeo.
Yeo went on to add that, "I'm just glad I got my first match out of the way and there can't be a better time to show what I've got than against ChelseaSG. This game means alot to alot of the players and myself."
"I'm a big match player."
SFC News were then interrupted when charging out from the showers was defender Yip Siu Ming who seemed angered following Yeo's last comment.
"Who said Big Mac?!"
Yip finally realised he had erred when silenced by his fellow team-mates in the locker room.
"IT'S BIG MATCH, SWIM! NOT BIG MAC!"
Stretford FC play ChelseaSG this weekend, 7 June, at Beatty Secondary School.
Posted by Stretford FC at 10:25 PM